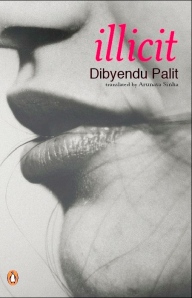 Illicit
by Dibyendu Palit
Published in Bengali in 1992
Published in English translation by Penguin India, 2010

From the jacket
Ashim didn’t attract her anymore. She had not realized that she had lost interest in this wooden, mechanical and tedious relationship. Until she met Partha.

Eight years into her marriage to Ashim, responsible and conscientious to a fault, Jeena, an attractive housewife, finds herself drawn to Partha Mukherjee. Stolen glances and clandestine meetings lead to a weekend trip to Puri while Ashim is away on business. At Puri, however, after a night of passion turns violent, Jeena is besieged with doubts about her illicit relationship.